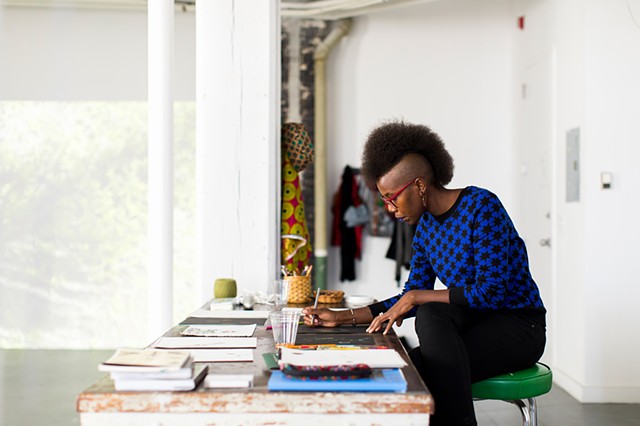 Miatta Kawinzi is a multi-disciplinary artist. She explores the figure, the inner & outer landscape, and culture as sites of re-imagination & possibility. She works with images, objects, sound, space, the body, and language.

She was born in 1987 in Nashville, TN to a Liberian mother and Kenyan father & received an MFA in Studio Art from Hunter College in 2016 and a BA in Interdisciplinary Art & Cultural Theory from Hampshire College in 2010. Based in NYC, she has exhibited and/or performed her work in the US, Mexico, South Africa, France, Switzerland, Trinidad & Tobago, and Liberia, where her work is included in the Art-in-Embassies public collection in Monrovia.

Her work has appeared in publications including the Studio Museum in Harlem’s Studio Magazine, Dancing While Black Journal (Angela's Pulse & Hemispheric Institute of Performance and Politics Press), Femmescapes Magazine, and Apogee Journal.

Exploring the intersections of social engagement and creative practice, Kawinzi also works as a community-based teaching artist & workshop facilitator and museum educator. She has participated in talks/panels and/or facilitated workshops in spaces including the 1-54 Contemporary African Art Fair, the Octavia Project, the Studio Museum in Harlem, Columbia University, the Queens Museum, Weeksville Heritage Center, and the Open Engagement conference & has held professorial teaching appointments at Hampshire College and the University of Richmond. Photo: Colin Conces.